11 Infographics and Videos for Teaching Economics

via Free Technology for Teachers by noreply@blogger.com (Mr. Byrne) on 11/30/11

Mint, the free money management service, regularly posts interesting infographics on its blog Mint Life.  One of the better infographics they've featured is What Is a Stock? What Is a Stock? uses clear graphics and plain terms to explain what a stock is, offer a brief history of stock markets, and give a brief explanation of why people buy stocks.

Curious About George: What is the Lifespan of the Dollar Bill? is an interesting an informative infographic from CreditLoan.com. The infographic offers provides flow charts of the production, distribution, and eventual removal from circulation of currency. Some statistics about the quantity of dollar bills produced every year is also included in the infographic.

Your Wealth Puzzle offers a neat infographic that could be useful in a consumer education course. The infographic uses a board game format to demonstrate the steps a person needs to take in order to build and maintain a good credit rating.

Visual Economics designs infographics to educate people about various topics in economics. One of their infographics that I like is How Do Americans Save Money? The infographic explains the differences between saving and savings and what disposable income is. The infographic also defines consumer confidence the sentiment index.

The New York Times offers an interactive infographic designed to help people determine when it makes financial sense to buy a home rather than rent a home. Users of the interactive infographic can enter variable data such as home price, interest rates, rent prices, rental rate increases, and housing market changes to determine when it's best to buy a home rather than rent. Users can also account for information like insurance rates, condo fees, and opportunity costs.

On Man vs. Debt I found the Student Loan Scheme infographic about student loans. Produced by CollegeScholarships.org the infographic features a flowchart that explains how student loans can burden people for years. As someone who, after ten years, relatively recently paid off his relatively modest student loans, I can tell you that I am happy my student loans were not any bigger. This infographic presents some good information for students and parents to consider before signing-on for tens of thousands of dollars in debt.

Through Michael Smith's Principals Page blog I discovered The Cost of Dropping Out produced by Teacher Certification Map and MAT@USC | Master's of Arts in Teaching. The infographic shows the costs to individuals and to the community of dropping out of high school. I've dropped the infographic into Zoom.it to make it fit below.

Follow the Money is a video that summarizes the data collected on Where's George? Where's George? is a website that was established for the purpose of tracking the travels of one dollar bills. Watch the video below.

The worlds of open source and freeware both include many outstanding applications for working with graphics and photos. These include standard fare such as image editors, but it's also worth looking into more unusual graphics tools that you can work with for free. Whether you want to produce splashy graphical documents, enhance graphics on a blog or web site, create eye-catching logos, or more, check out this collection of five great, free graphics apps.

When it comes to open source graphics tools, GIMP gets a great deal of attention, and there are many free online resources available for it, but if you're in search of a free drawing and illustration tool that can compete with Adobe Illustrator and is increasingly useds by web designers for effects, logos and still graphics, give Inkscape a try. It runs on Windows, Mac OS X, and Linux, and is well-known as a powerful and flexible drawing and vector editing application. We covered it and resources for getting started with it in this post.

Dia is very similar to Microsoft's Visio application, and was developed as part of the GNOME project's office suite. There are many types of useful diagrams and flowcharts you can do in Dia. You can associate multiple diagrams with each other and work on them in tandem. Dia also exports diagrams in most popular graphics file formats. We covered the application previously in this post.

Blender is one of the most popular free, open source 3D animation and graphics applications, for Windows, the Mac and Linux. You can learn how to create a great looking logo, how to execute special effects, and more. Blender has been used to produce striking full-length animated films and is worth getting to know if you haven't tried it. You can also download a great, free book on Blender, with step-by-step project instructions.

Aviary is a truly remarkable suite of free, online graphics applications, and it has won many awards. It isn't open source, but it is freeware, and has become much more than the dedicated image editor that it started out as. You'll find a vector editor, a color palette editor, a tool for creating visual effects, and more. All of the tools are available for you to use within your browser. Aviary also comes with many tutorials, similar to those found online for Photoshop. 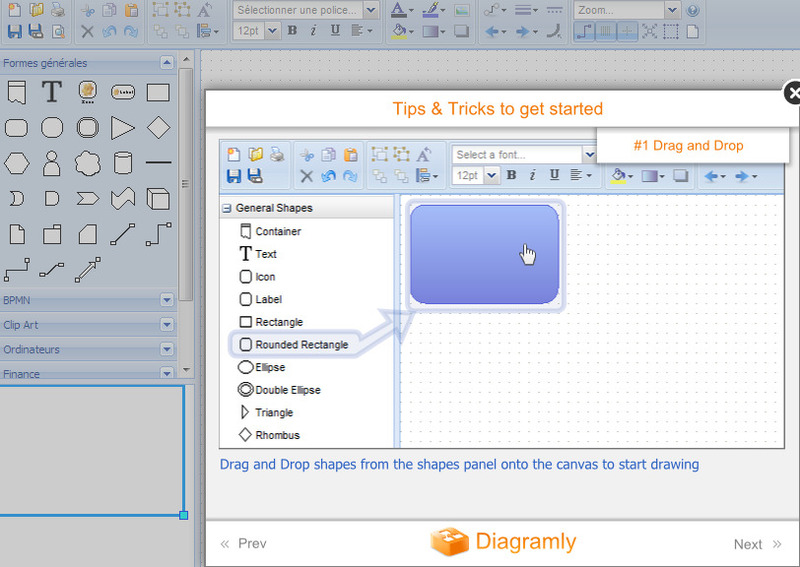 Source: www.diagramly.com, via 21st Century Tools for Teaching-People and Learners

Visual Thinking Archive - a set on Flickr: "This group of visuals has been designed and produced by me (David Armano). You are welcome to use the visuals for presentations, slideshows and blogs posts. Please provide proper attribution and a link is always appreciated."

Find & Make Your Own Infographics With Visual.ly: "

If you like clever data visualizations, you’ll love Visual.ly, a startup that lets you find and make infographics with all kinds of web-based data.

The site aims to be a repository for graphically organized information on the web, as well as a marketplace and community for publishers, designers, researchers and everyday web users.

Third, Visual.ly is a web-based platform for creating infographics of your own — no graphic design experience or software required.

Already, the site boasts a collection of 2,000 infographics in its indexed and searchable galleries, as well as 60,000 users who signed up for beta access.

Here’s a demo of the site:

In a release, co-founder and CEO Stew Langille said, “We knew we were onto something big, having seen the power of data visualization work so dramatically across the Web.”

The service’s main infographic creation tool will launch in a few months.

Not only does the site aggregate and help you find great infographics, it also lets you make infographics of your own using various types of data. A demo of this capability can be seen right now with the Twitter Visualizer, a tool that lets you build and customize Twitter infographics.

Right now, you can use Visual.ly’s Twitter tool to generate infographics based on yours and others’ Twitter usage. For example, here’s a visualization showing my tweet data compared to data from Tal Siach, a Visual.ly co-founder:

Top image based on a photo from iStockphoto, spxChrome

Learning How To Visualize: "

Been getting a ton of requests for ‘how to’s and guides for creating decent visualizations and information designs. Made me think: maybe I could do some workshops in this area. I like developing ideas and working with people. Could be fun!

So if you think you’d like to attend a workshop on visualization or organize one for your organisation, please fill in this quick form (30 seconds).

In the meantime, you might be interested in a section I’ve been building in a far-flung corner of the site. It documents my process for creating infographics.

The most recent one explores the stages we went through creating an infographic for Wired magazine about planets in other solar systems – or “exoplanets”.

(Microscopic, dark and unimaginably far away, these tiny celestial objects should be impossible to spot. But thanks to extreme telescopy, deep data analysis, and ingenuous hacking, astronomers have now detecting over 500 bizarre and exotic alien worlds thousands of lights years away. So cool!)

Here’s how we created it.

Timelines: TimeTravel in TV and Film

Yup, we went through 36 drafts of this. Yes, I am a rampant perfectionist. Yes I can be difficult to work with.

Information is Agonizing: Designing The Cover of the book

Creating the UK cover for Information Is Beautiful was an agonizing yet gloriously creative pain in the ass involving over 90 – yes nine-ty – different versions.

Versioning: Because Every Design Is Good For Something

How do you flag and label 142 countries on a single map without choking the result? With great difficulty.

I hope this is helpful. And again if you think you’d like to attend a workshop to learn how to create these kind of images, please fill in this quick form (30 seconds).

Social networks in every country might live on the same Internet, but that doesn't prevent differences in online customs and culture from developing along geographic borders.

Ongoing market research service Global Web Index has mapped these differences in the infographic above (click it to enlarge).

The research, run by London-based consultancy Trendstream, has conducted six waves of surveys about global consumer adoption of the Internet and social media in 36 markets. It used data from its February 2011 surveys of between 750 and 2,000 online users in each market to define three behavior types: messagers, groupers and content sharers.

In some countries, many of them Asian, most people were focused on content sharing. Others, like the UK and Canada, had more people who put a greater emphasis on sending messages.

Trendstream also used data from the survey to map social network penetration in each country that it surveyed.

Does the way any country uses social networks surprise you? Let us know in the comments.

Some participants asked for more practical examples of how to enhance the presentation of some materials - will do that next time if people send me stuff in advance - if anyone who was there would like me to do something anyway - would be happy to see what I can do.

Number of people interested in using cartoons - will blog something about tools for that soon.